In conjunction with the Sultanate's celebrations of the 49th National Day, and keeping in line with its vision of 'helping people win', Sohar International had recently held special draws worth RO 49,000 distributed among 49 customers equally under its Prize Scheme to commemorate the momentous occasion. The event was held at Sohar International’s Head Office at the Waterfront in Shatti Al’Qurum under the patronage of Sayyid Mohammed Ahmed Al Busaidi, Assistant Wali of Muttrah.

The dedicated National Day draws under the Sohar | Prize Scheme took place on the sidelines of the Bank’s National Day celebrations where a number of the bank’s executive and senior management were present. The event began with an inaugural speech from the bank, followed by a welcoming speech. Subsequent to the draws and the announcement of the lucky winners, the bank presented a token of appreciation to the guest of honor.

Commenting on the Prize Scheme, Mr. Khalil Salim Al Hedaifi, Chief Retail Banking Officer at Sohar International said, “Sohar International is committed to helping people, customers, and communities to achieve more wins and prosperity, and we have succeeded over the past years in helping tens of thousands of customers achieve their ambitions and dreams under the Sohar|Prize Scheme platform. The dedicated National Day draws enabled us to further share this joyous occasion with our customers providing more chances and opportunities for them to emerge as winners with Sohar International.”

Congratulating the winners, Mr. Khalil Al Hedaifi added: “I am delighted to congratulate all the winners and encourage them to continue saving to increase their chances of winning in the yearend draws that will offer customers RO 400,000 distributed equally among four lucky winners, two general category and two 'wealth management class.”

Commemorating the auspicious occasion, the bank also celebrated with a cake cutting ceremony with the participation of its employees at their Head Office. The ceremony was followed by a series of national and cultural activities that were in line with the country’s great heritage. Sohar International were also the exclusive sponsors for Oman Run 49 – a marathon run by 49 participants across a structures route of 49 kms depicting the Oman Map. The bank also launched a social media competition (#فخر_الفوز) to share the festivities with customers who were unable to partake in person with the celebrations. The social media competition entailed a set of 5 questions on eminent Omani personalities who have bought fame and recognition to the country. Winners of the completions get a chance to win a total cash prize of RO 1000. 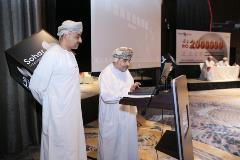